By Dr Veronesi on March 5, 2015 in Sports Injuries 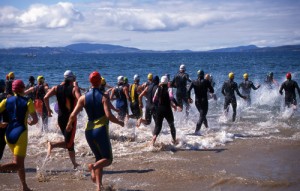 It’s common knowledge that a triathlon is one of the most challenging sporting events in the world. Athletes train tirelessly to reach the maximum levels of success, and back to back running, biking, and swimming takes its toll on even the fittest of individuals. Because of this, it’s no surprise that many end up with various ongoing injuries at the end of their career, or even during it. For those who train and take part in the odd triathlon for fun or fitness, the possibility of injury can be even greater, so it’s important to try and prevent injury before it happens; we all know that prevention is better than cure!

How can chiropractic help?

Chiropractic has been shown to be highly advantageous not only for the treatment of injuries, and the prevention of them, but also for improving your personal bests. If your body is at its optimum level for competition, you are more likely to be able to push yourself further, achieve goals, and reach that Holy Grail time you’ve been aiming towards.

Physical optimisation can helped through chiropractic, and when used prior to an event, the manual adjustments used by highly trained experts during the treatment help improve the body’s oxygen intake, taking it right to the limit, allowing freer movement, and a longer lasting performance time.

Of course, we mentioned prevention of injury, and since chiropractic is so focused on treating the body as a whole, focusing on the nervous system and the musculo-skeletal system in particular, it is highly effective in achieving healthy muscles and tissues, allowing ease of oxygen flow throughout, and preventing injuries from occurring during training, or the event itself.

Well, to summarise, chiropractic is proven to help in the prevention of possible injury, better training results, which of course lead to better race performance, increased oxygen flow throughout the body, freer movement and less stiffness and aching, possible increased performance times, and more chance of athletes completing the event in its entirety. At NeuroBalance Chiropractic we look at all these things including your blood oxygen levels!

For anyone serious about their triathlon training and race performance, chiropractic is essential. Treating the body and its functions as a whole, understanding each plays a major role in helping push the body to the absolute limit without detrimental effect, and taking responsibility for overall health and wellbeing in physical exercise is hugely important in not only an athletic sense, but also for the body’s personal best health too.

Call the practice now on 02 9938 5456 to arrange an appointment and discuss your own personal needs. We treat every single individual as exactly that – an individual. No one person is the same, and everyone deserves a single-minded approach to their health and wellbeing.

Pushing yourself to the physical limit in competition can give you great achievement results, but don’t let it be at a detrimental effect to your body’s health – remember, prevention is always better than cure!

To celebrate the Sydney Pink Triathlon we’re offering a free triathlon “Secret Advantage” screening. At NeuroBalance Chiropractic, we understand the specific demands of triathlon, and we know that the run is going to hurt – but it doesn’t have to hurt as much as it does.

The advantage is physical optimisation of the 5 essential functional movements needed to complete a triathlon. Book an appointment today and let’s talk about how we can make your run, bike, and swim faster. 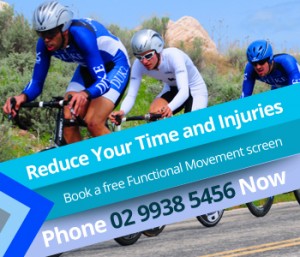