By Dr Veronesi on November 24, 2014 in Traumatic Brain Injury 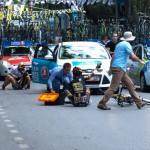 What first seemed like just a knock on the head can turn into a full-blown trauma. But how can you tell if is serious? What should you do if you have traumatic brain injury? Here are some important facts about traumatic injury.

There are two types of brain injury – TBI and ABI. An Acquired Brain Injury (ABI) is most often associated with pressure on the brain and occurs at the cellular level (e.g. tumour, stroke. Traumatic brain Injury or TBI is another type of brain injury caused by a trauma (e.g. cerebral contusions, penetrating injuries caused by a violent impact that pierced the skull and brain – bullet, knife, etc.)

Some common causes of head injuries are falls (25%), motor vehicle accidents (more than 50%), and assaults or violence (nearly 20%). While these head injuries can be minor because of the protection of the skull, motor accidents are at the top of the of the list as the leading cause of traumatic brain injury for all ages and that ages 75 and older have the highest risk of traumatic brain injury-related hospitalization. However, the fact still remains that you don’t have to be hit on the head to suffer brain injury. A blow to the jaw, a hard knock and previous head injuries even though there has been a full recovery can have serious repercussions, lead to brain swelling and is enough to cause a brain injury.

Can a simple bump on the head become fatal?

Since the head and the brain can still be injured whether or not the skull is damaged, the answer is yes. As a result, healthcare providers are careful enough to look at several indicators or warning signs of neurological impairment caused by brain injury. TBI symptoms can range from none to mild pain and generally, they fall into major categories – cognitive, perceptual, physical and behavioral. Specifically, the following are common warning signs of a traumatic brain injury:

TBI can interfere with how the brain works and if a recent blow to the head causes behavioral changes, seek medical advice immediately. Depending on the nature of TBI, health care professionals use neurological tests such as brain imaging with computed tomography (CT) to assess the severity of the injury.

Treatment and Coping with TBI

The earlier the brain injury is diagnosed and treated, the better the general results because a mild concussion can be as dangerous as clearly seen physical injuries. Treatments on TBI include medications and alternative medicines, rehabilitative therapies, coping strategies for existing cognitive, behavioral, and physical problems, and assistive devices to alleviate symptoms like headaches, chronic pain, behavioral problems, depression, seizures and chronic pain.

Even though TBI is a life-threatening injury that poses challenges to its patients, traumatic brain injuries are treatable depending on the individual and degree of damage. With the right health care provider and immediate medical treatment, TBI patients can prevent further damage.