By Dr Veronesi on August 29, 2014 in Chiropractic, Migraine 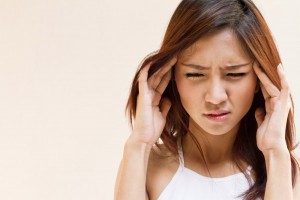 According to international healthcare group Bupa, about two million Australians are affected by migraines. Health specialists attribute the concerning statistics to the predominantly unhealthy lifestyle that most people have nowadays which is composed of a poor diet, stressful daily demands, and lack of schedule regularity. Aside from these, there are other known migraine triggers, such as bright lights, loud noises and certain odours or perfumes, smoking or exposure to smoke, alcohol consumption, menstrual cycle fluctuations pills, hormone fluctuations during the onset of menopause, foods containing tyramine, monosodium glutamate (MSG), or nitrates, and other foods such as chocolate, nuts, peanut butter, avocado, banana, citrus, onions, dairy products and fermented or pickled foods.

However, doing without these triggers rarely offers consistent results (many just prefer to be on the safe side and avoid or minimise exposure to or consumption of the triggers), which only goes to show how complicated migraine could be.

Migraine comes in two different types, the first one being migraine with aura. This basically means that the condition has neurological symptoms commonly in the form of visual disturbances like blind spots, coloured spots, stars, flashing lights before the eyes, tunnel vision, temporary blindness, and zigzag lines. Other symptoms include dizziness, numbness, weakness and vertigo (fainting, paralysis, confusion, etc.). Migraine with aura is often described as the earlier stage of a migraine; it usually just lasts an hour, but is often followed by the second type of migraine, which is worse.

The second one is migraine without aura, which is what about 80 percent of migraine sufferers really complain about. The pain is concentrated in the front of the head, on one or both sides of the temples. This is the type of headache that can linger for days (up to 72 hours) and really render people useless because it’s pain combined with a myriad of vestibular symptoms which include nausea, vomiting, low blood pressure, unsteadiness, and extreme sensitivity to movement, light and sounds.

Whether you frequently suffer the former or the latter type, one thing’s for sure: The occurrence of migraine can compromise your life. Therefore, it’s crucial to get appropriate treatment as soon as possible. There are prescription drugs that you can get, but they are not consistent in alleviating the symptoms. There are other options to try which are safer and non-toxic.

It’s important to mention that pain specialists stress that there’s no cure for migraine, but methods to reduce frequency of occurrence and pain management are present; some of them are provided below and they are often integrated with a migraine pain management programme.